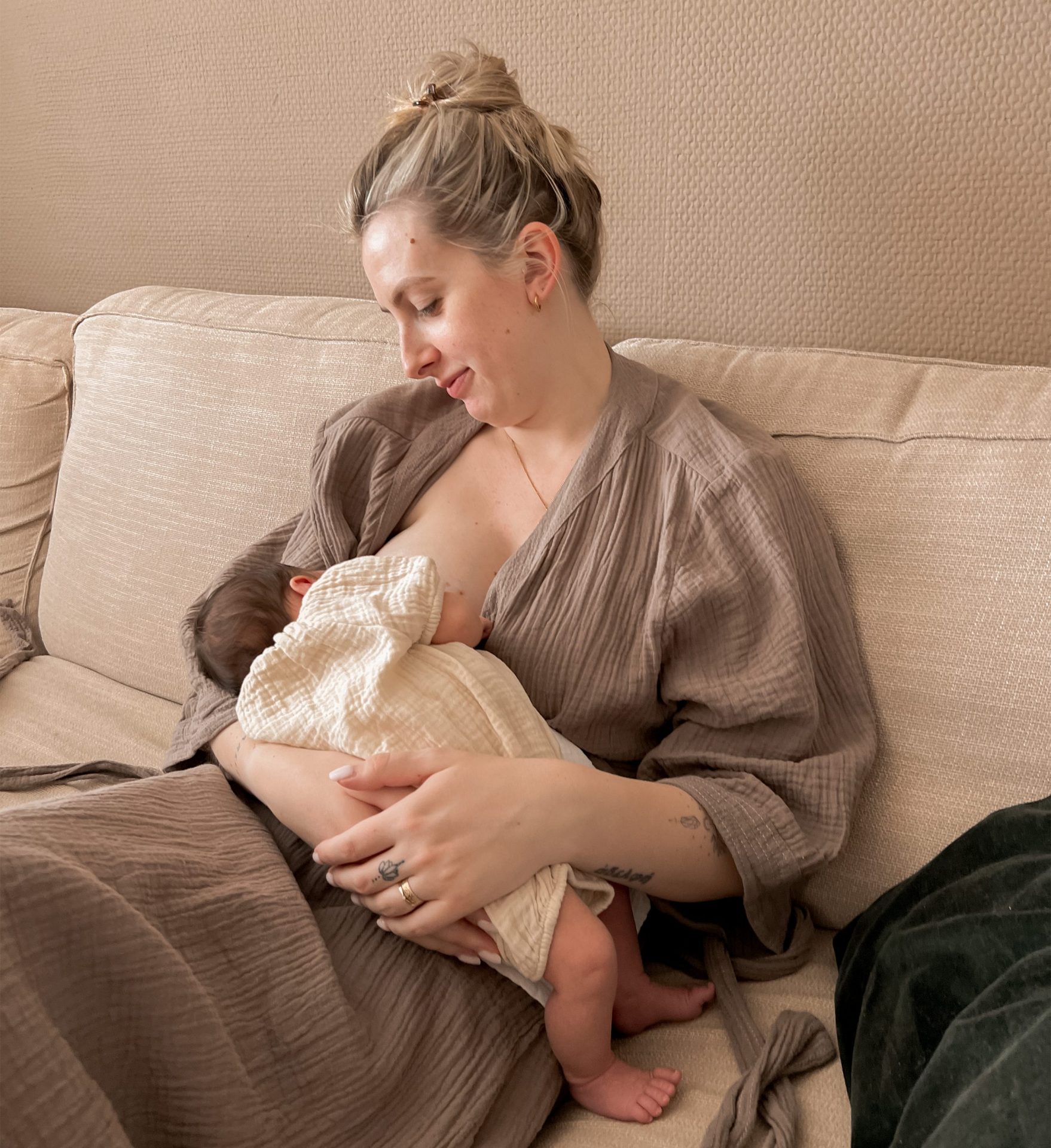 Our short but sweet breastfeeding adventure

When our daughter was born she had a spirited start so she did not manage to drink at the breast, I had a very hard time with this.

Our short but sweet breastfeeding adventure

I am Merel, mother of our daughter Oliana-Lily (0). Before I was pregnant I always said I didn't want to breastfeed, it seemed complicated and inconvenient that I would be the only one who could feed our baby. Once I became pregnant with our baby daughter, my mind changed completely. It seemed wonderful to be able to breastfeed and now I even got nervous at the thought that it might not take off.

When our daughter was born she had a rough start so she didn't manage to drink at the breast, I had a really hard time with this. In advance I had already put the NurtureGoods pump in my flight bag 'just in case' and I was super happy with it now! I could still pump nutrition for our girl so she could get it through her sin.
The first few days I struggled to get 3 ML out but I kept pumping stubbornly every 3 hours to get everything going properly and so I was able to give more and more of my own formula to our girl. It felt really nice to still be able to give breast milk to her this way.
At the hospital the explanations were sparse, nurses are obviously very busy so at times I had no idea what I was doing but enjoyed pushing through so she could get my feedings. And so that on day 2 I was already on 10 ML, that really felt like a lot!

After a few days, we were all allowed to leave the hospital together and things could really begin. She was latching on super well and my feeding was picking up more and more. We had a great maternity nurse who helped us very well with the breastfeeding and pumping.
After a few days I even had so much that I did have to pump to get it under control a bit.

Because the bottles, which you can attach to the device, had enough volume, I didn't have to keep pouring over and I could quietly sit through a pumping session. In addition, what was also very nice was that the battery lasted quite long so you didn't have to hang everything back on the charger after every pumping session.
Also, the shields are super comfortable due to the rubber attachment. The unit also sucks in tightly so nothing runs by and therefore wastes.

Unfortunately our breastfeeding adventure stopped after 3 weeks. Oliana-Lily found breastfeeding more and more tiring, so I could spend 1.5 hours feeding her and after 1 hour she was hungry again. Because of this I was only busy with feeding which took its toll. We then decided that I would pump everything and give it to her by bottle, which was also nice for my husband because that way he could also feed our girl.
I started pumping full time which went very well the first few days, we didn't need to give artificial milk because I had enough to feed her. I also took the bottle very well right away which was very reassuring.I got bags in the house so I could freeze whatever I had 'left over' and save it for a possible later time. I easily pumped 150 ML each session, so I had more than enough for each feeding round + more.

But after a day or 2 everything suddenly became drastically less and because of the stress my production stopped, as good as,. I was very sad about that because I wanted so badly to be able to give breast milk and I couldn't anymore. I tried pumping for a few more days but became more and more stressed so I decided to stop completely. With pain in my heart but I knew I could not be a good mother to Oliana-Lily if I was so stressed and not feeling well.

With the choice to stop I still regret it to this day but I know it was the best thing for our daughter. She is doing super well on formula, is a contented and happy little girl and that is all that matters.
I wouldn't have wanted to miss those first weeks of breastfeeding for anything, and thanks to the pump from Nurturegoods, I was able to provide my girl with my milk even longer, some of which is still in the freezer to this day.

Everything was made a lot easier for us thanks to this fine pump and I can recommend it to everyone!

This website uses cookies to improve your experience while you navigate through the website. Out of these, the cookies that are categorized as necessary are stored on your browser as they are essential for the working of basic functionalities of the website. We also use third-party cookies that help us analyze and understand how you use this website. These cookies will be stored in your browser only with your consent. You also have the option to opt-out of these cookies. But opting out of some of these cookies may affect your browsing experience.
Necessary Altijd ingeschakeld
Necessary cookies are absolutely essential for the website to function properly. This category only includes cookies that ensures basic functionalities and security features of the website. These cookies do not store any personal information.
Non-necessary
Any cookies that may not be particularly necessary for the website to function and is used specifically to collect user personal data via analytics, ads, other embedded contents are termed as non-necessary cookies. It is mandatory to procure user consent prior to running these cookies on your website.
OPSLAAN & ACCEPTEREN